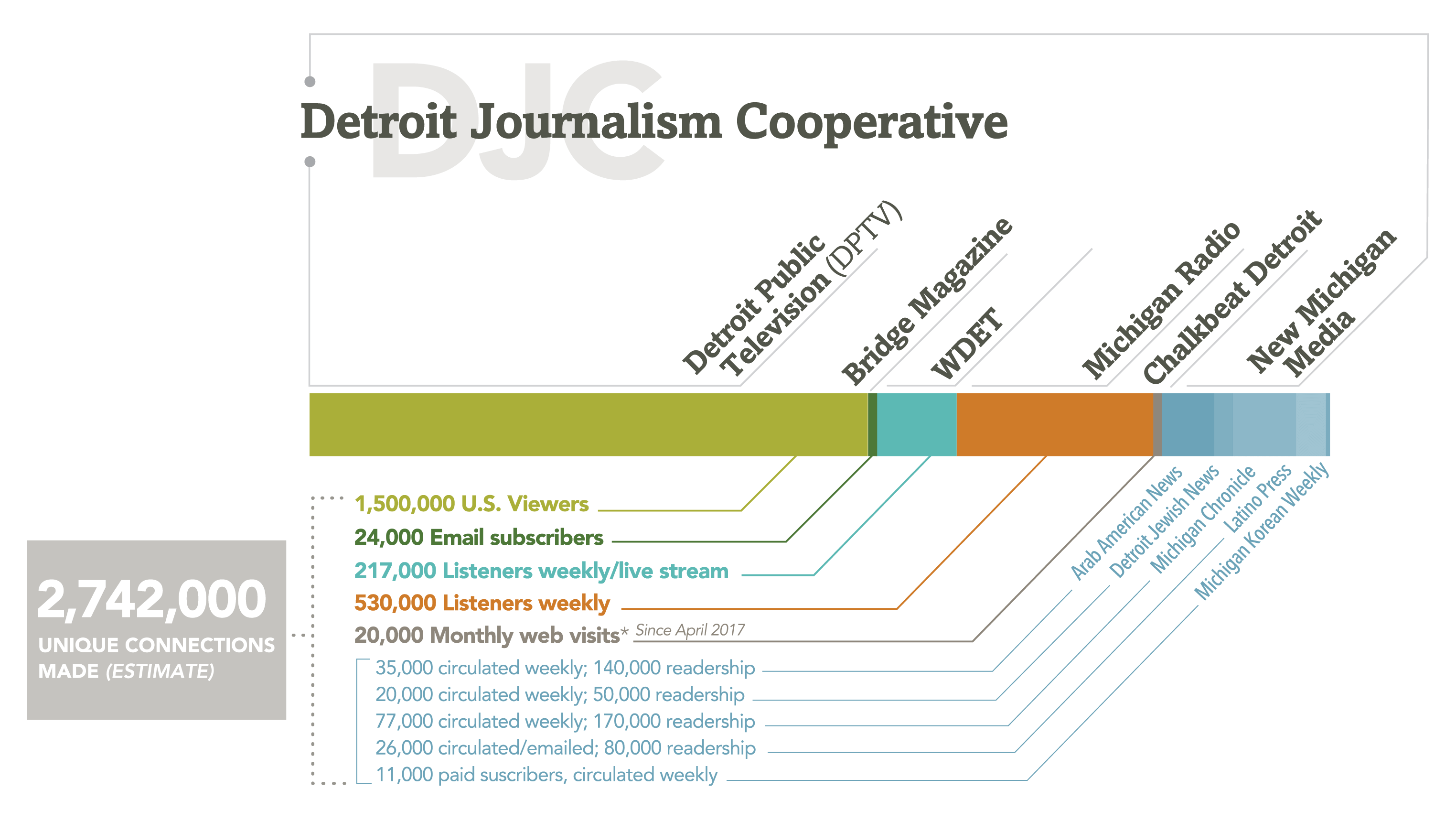 Journalism gives people the information they need to make better decisions about their livelihoods. When citizens are more informed, they are better able to enact change in their community and civic institutions.

With changes in how people access news and information, traditional newspaper readership and revenue have fallen for several decades. According to a U.S. Bureau of Labor Statistics report released in April 2017, the news industry employed more than 411,000 people in 2001; in September 2016, that number fell to fewer than 173,000 people. Without journalists to pursue vital objective facts, citizens become less informed.

In the Detroit area, media outlets have a rich history of excellence — including numerous Pulitzer Prizes and other awards. Yet local media in southeast Michigan, much like the national media, are struggling to find sustainable business models, with legacy newspapers in particular. The Detroit Free Press and The Detroit News, while still prominent in the community, work with a fraction of their former staff due to steep declines in advertising revenue. The Detroit Free Press went from a staff of 350 journalists in 1995 to 300 in 2005, to approximately 120 journalists in 2017.

The Community Foundation recognizes the critical role the local media play in the dissemination of information to residents, as well as the value of engaging consumers to better understand the needs of the community. The Detroit Journalism Engagement Fund at the Community Foundation seeks to increase the quality, outcomes, and reach of journalism in the region, with an emphasis on engagement, innovation, and the equitable recovery of Detroit. The Fund, through its grantmaking program, will seek to advance quality journalism while reflecting the perspectives of diverse constituencies including people of color, women, and low-income communities. The Fund was launched in 2017 as a partnership of the John S. and James L. Knight Foundation, the Ford Foundation, and the Community Foundation.

The first step in advancing the purpose of the Detroit Journalism Engagement Fund was retaining Debra Adams Simmons, a 30-year newspaper reporter and editor who is now an executive editor at National Geographic, to conduct a scan of the area’s media landscape. The scan reviewed various media platforms, including print, digital, radio, and television. This information helped in understanding the status of southeast Michigan’s media outlets, as well as identifying the strengths and weaknesses.

In addition to noting the rich history of journalism excellence in the region through such papers as The Detroit News and the Detroit Free Press, Simmons’ scan pointed out that Detroit also has an important tradition of robust ethnic and community news providers. Among them are the Michigan Chronicle, Latino Press, the Detroit Jewish News, The Arab American News, and The Michigan Korean Weekly. Together, the organizations have created a working consortium called New Michigan Media. These outlets also face financial, staffing, and technology challenges. They are now working with a larger group of nonprofit media organizations in a unique larger consortium, The Detroit Journalism Cooperative. Together, all of these platforms have a significant regional reach.

Data and interviews found that as the media industry is changing and shrinking, citizens are concerned that Detroit’s most critical news stories are under-covered. They believe the coverage disproportionally focuses on the revitalization of Detroit’s downtown at the expense of the rest of the city and the diversity of the population. Among Simmons’ findings was the belief that many metro Detroit news consumers do not see themselves reflected in the print content or in the demographic makeup of the newsrooms.

At the same time, with the declining number of journalists in southeast Michigan, there are concerns about the capacity to provide relevant, contextual coverage of the metro area at the quality that Detroiters expect and deserve. Also, while news organizations are expected to bring objectivity and credibility to reporting, Simmons points out that anxiety exists about the future role of journalists, as people are relying more on social media channels like Twitter and Facebook for their news.

The report made numerous observations and pointed out opportunities. For example, the report noted that it is important for journalists to interact more with their consumers in order to be aware of and recognize opinions and viewpoints of communities that feel underrepresented, as increased engagement can yield higher-quality journalism and trust between journalists and the citizens they serve. The report indicated there is an opportunity to build additional, mutually beneficial partnerships with large legacy media, such as The Detroit News and Detroit Free Press, and digital journalism. Finally, the region can also capitalize on the existing network of freelance and independent journalism, as well as young, diverse new talent.

The findings of the scan provided a framework for the three foundations, through the Detroit Journalism Engagement Fund, to advance quality journalism while reflecting the perspectives of diverse communities. Key to this effort is bolstering engagement among news producers and news consumers. To advance these goals, a grants program was publicly announced in September 2017. Grant awards and the programs to be supported will be announced in December 2017.

This article originally appeared in the Fall 2017 Newsletter

2020 Census: Getting a Complete Count

Further Connecting With Our Community