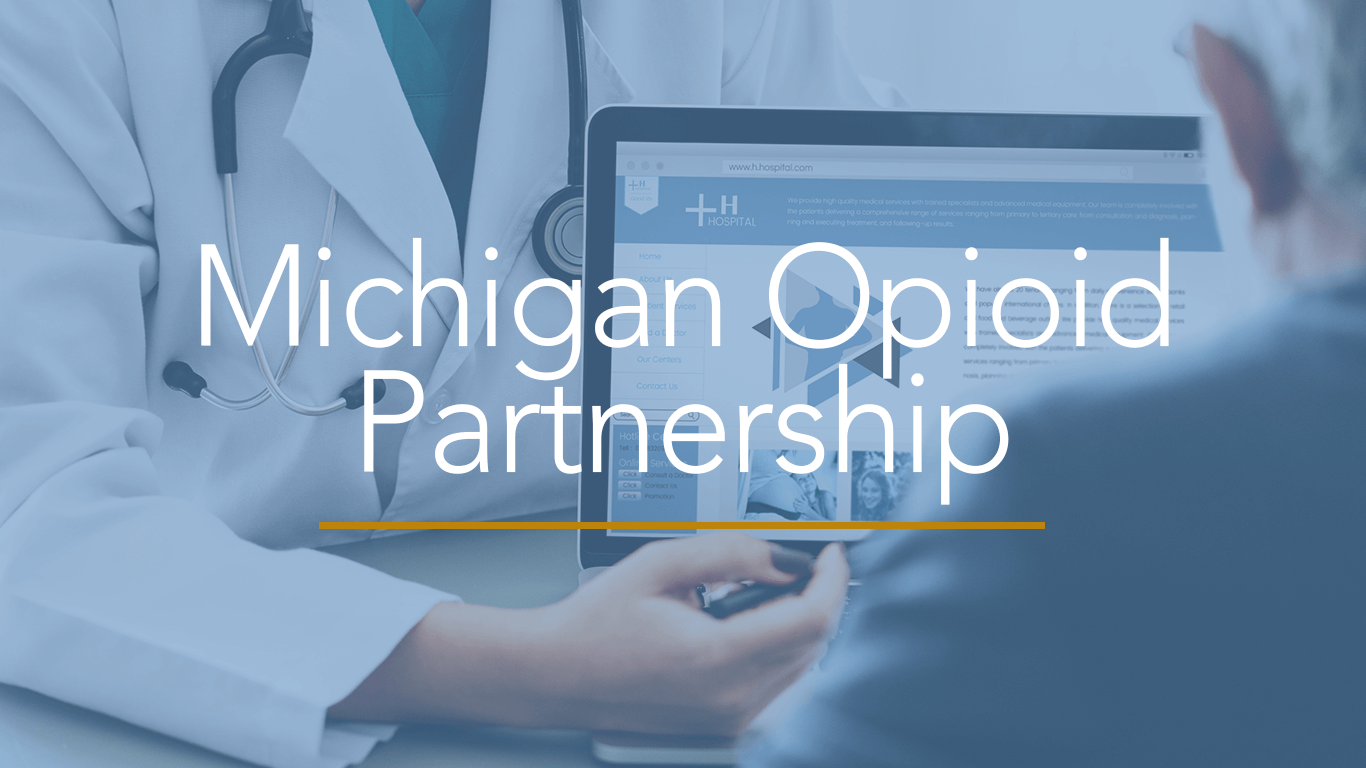 As opioid addiction rates rise to unprecedented levels in the state and around the country, a new public-private collaborative including the Michigan Department of Health and Human Services and key funders has formed with the goal of decreasing opioid overdoses and deaths. The Michigan Opioid Partnership will address the growing opioid epidemic through prevention, treatment, harm reduction and sustained recovery.

The collaborative will make available up to $2.6 million to support efforts on Medication Assisted Treatment (MAT), from the first point of medical contact in a hospital emergency room to continued treatment in a hospital or community-based program focused on long-term treatment of opioid use disorder. MAT is an evidence-based treatment for opioid addiction that includes both medication and behavioral therapy.

“Opioid deaths are growing at an alarming rate,” says Larry Scott, Director, Office of Recovery Oriented System of Care, Michigan Department of Health and Human Services, one of seven Michigan Opioid Partnership organizations. “The partnership was formed to address the growing opioid epidemic by supporting innovative projects that create change.”

The partnership will invite hospitals and organizations from counties across the state to apply for funding. Grants will be distributed to organizations working to address a wide range of factors fueling the drug epidemic. The funding will pay for planning, training and/or coordination of treatment. Recipients will be announced in early 2019.

“Collaborating with community groups, public health officials and providers across the state has been critical to Blue Cross’ efforts addressing the opioid epidemic,” said Daniel J. Loepp, president and chief executive officer of Blue Cross Blue Shield of Michigan. “Through these partnerships, we hope to continue improving addiction treatment, enhancing awareness of options available to those in need and ultimately saving lives.”

An Annals of Emergency Medicine study published earlier this year showed emergency department-facilitated transitions to outpatient care are more likely to lead to healthier patient outcomes when they begin with MAT in emergency departments. In addition, expanding patient access to MAT helped avoid potential treatment gaps and eased entry into appropriate outpatient care, according to the study.

Food and Drug Administration (FDA)-approved drugs used to treat addiction include methadone, buprenorphine and naltrexone. While they have been shown to reduce cravings and withdrawal symptoms and prevent overdose, the drugs are difficult to access. Institutions in California, Massachusetts and Iowa have found success offering Medication Assisted Treatment for opioid addiction in emergency rooms and then connecting patients directly to managed treatment. Efforts have shown to reduce relapse and overdose. The drugs are most successful when combined with regular therapy.

For more information about the Michigan Opioid Partnership, visit CFSEM.org/opioid.

Learn More About The Partnership