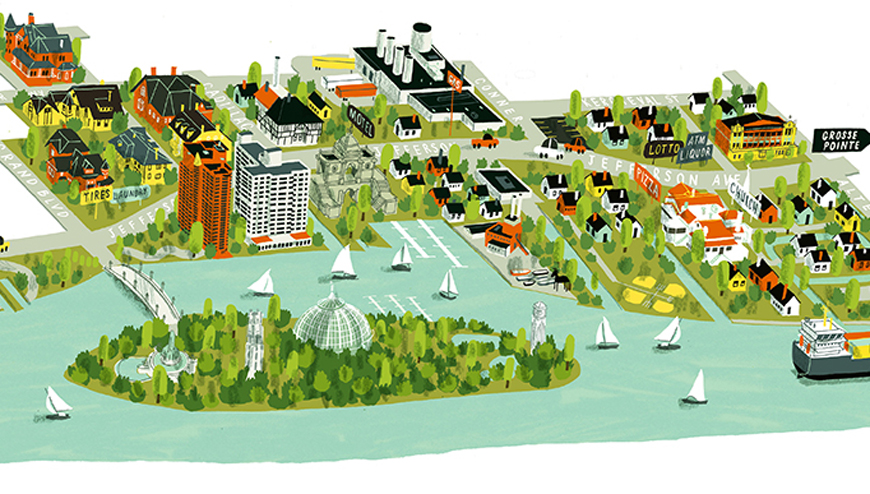 Detroit’s Livable, Diverse East Side Neighborhoods Get a New Brand

When the media writes about Detroit or people think of it, two things come to mind: Downtown/Midtown and the neighborhoods. Jefferson East, Inc. aims to change that with its Go East branding campaign.

The idea is to bring The Villages, Lafayette Park, Rivertown, Marina District and Jefferson-Chalmers together in one large brand similar to what Midtown Detroit, Inc. did for the conglomerate of neighborhoods just north of Detroit’s Central Business District.

Lots to Work With

There is no dearth of resources for Jefferson East, Inc. to draw upon.

It has housing, that is big and small — and affordable. There are institutions that can’t be found anywhere else in the city, like Pewabic Pottery and the Detroit Yacht Club. Natural beauty abounds from the Dequindre Cut to the RiverWalk to Belle Isle. Innovative things are happening from pop-up shops in Jefferson- Chalmers to the creation of Hantz Woodlands. Marquee businesses are opening their doors, such as Avalon International Breads to Craft Work.

Jefferson East, Inc. wants to make the sum of these parts greater than their individual value. Go East will tell the world about it. To help make that happen, Jefferson East, Inc. has received a $30,000 grant from the Community Foundation to support placemaking and economic development along Detroit’s East Jefferson Avenue corridor. Other major community-oriented players are participating, like The Kresge and Hudson-Webber foundations, Bank of America, the City of Detroit, DTE Energy, LISC Detroit, PVS Chemicals and Stroh Companies.

Jefferson East, Inc. is leveraging the collective power of these organizations to help bridge whatever divides exist between the neighborhood block clubs and economic development corporations. For instance, Jefferson-Chalmers’ business district has experienced a good shot in the arm thanks to the pop-up shops that have appeared over the last year. Jefferson East, Inc. is working to help make some of those pop-ups permanent.

“We can direct support where there are no programs,” Elling says. “We can also supplement existing programs.”

No Islands on the River

The Go East initiative also brings these communities together in the public’s eye.

Go East launched a media campaign this winter that includes a new website highlighting each neighbor-hood and what makes it unique. It also employs a comprehensive social media campaign to complement marketing that will appear in print media and on WDET. Jefferson East, Inc. is also looking at putting resources into the corridor’s events, such as the summer Jazzin’ on Jefferson festival.

“We’re looking to do more events like that to bring new people to the corridor and help them become more familiar with the area,” Elling says.

Brian Hurttienne, executive director of The Villages Community Development Corp, is looking forward to the added attention Go East will bring. He believes it will make vibrant neighborhoods like Lafayette Park and The Villages stronger by emphasizing they’re not just islands of activity on the Motor City’s east side.

“It’s a very good opportunity for The Villages to get more exposure as well as the lower east side to get more attention,” Hurttienne says. “The Villages is fine but we’re kind of isolated without the rest of the east side.”

He adds the rebranding effort will remind people of all of the positives that come with living on the east side and the new developments that are in the works. “It will highlight all of the things we love about living in the city,” Hurttienne says.

James B. Nicholson Elected Board Chair Of The Community Foundation For Southeast Michigan