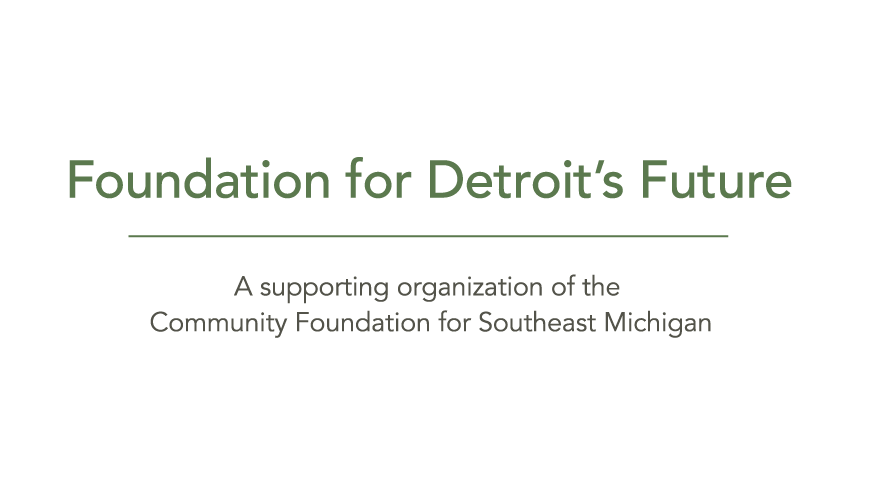 (Detroit) – With U.S. Bankruptcy Court Judge Steven Rhodes’ approval of Detroit’s Plan of Adjustment and the city’s emergence from Chapter 9 bankruptcy, the Foundation for Detroit’s Future (FDF) has begun implementing the “Grand Bargain” (which is technically called the “DIA Settlement” in the Plan of Adjustment). As set forth in the historic settlement of the City of Detroit bankruptcy, FDF was created to collect and disburse funds to the City for the benefit of the two pension plans with the intent to assist Detroit from emerging from bankruptcy and to restore its economic and cultural vitality for the benefit of all residents of the City, region and State.

A nonprofit organization that is affiliated with and administered by the Community Foundation for Southeast Michigan (CFSEM), FDF will carry out a number of carefully defined and limited responsibilities, including:

• Collecting funds from participating foundations and other contributors to the Grand Bargain and disbursing them to the City for the ultimate support of the pension funds;

• Monitoring the City of Detroit’s compliance with ongoing grant conditions, including proper pension fund oversight by investment committees, and providing status reports to the contributing foundations;

• Coordinating communications on behalf of the participating foundations regarding the implementation of the Grand Bargain to ensure accuracy, transparency and compliance with legal requirements.

The Foundation for Detroit’s Future leadership has a five-member board of directors, including: Chair James. B Nicholson; Vice-Chair Allan D. Gilmour; President & Secretary Mariam C. Noland; Treasurer Robert J. Manilla; and Director Kenneth T. Monteiro. Additionally, staff members from the Community Foundation for Southeast Michigan will support the work of the FDF, including vice presidents Robin D. Ferriby and Karen L. Leppanen, among others.

The Grand Bargain (DIA Settlement) that FDF has been established to implement is an agreement negotiated by Federal Mediators the Honorable Gerald Rosen and Eugene Driker, and which is part of Detroit’s overall Plan of Adjustment. A number of foundations that have longstanding commitments to Detroit’s sustainability, prosperity, and diversity are participating. The Foundation for Detroit’s Future is the legal entity through which the foundations and others will provide financial support and whose creation was delineated in the legal agreements of the Plan of Adjustment.

Under the agreement, foundations and other sources will contribute funds over a 20-year period to reduce cuts in retirement benefits earned by Detroit firefighters, police officers, and other public service workers. In return, the City of Detroit agreed to transfer the art and assets of the city art museum to the Detroit Institute of Arts (“DIA”), the nonprofit organization that operates the museum. The foundation funders group includes foundations that contributed more than $366 million to the DIA Settlement. The DIA and its supporters will provide $100 million, and the State of Michigan will contribute $195 million (the present value of $350 million over 20 years). The agreement is part of the Plan of Adjustment approved by U.S. Bankruptcy Judge Steven Rhodes, which makes possible an investment of a reported additional $1.4 billion to restore and revitalize city services in Detroit over the next ten years.

The agreements that FDF was created to help carry out are detailed in the Plan of Adjustment approved by the bankruptcy court and accessible online here.