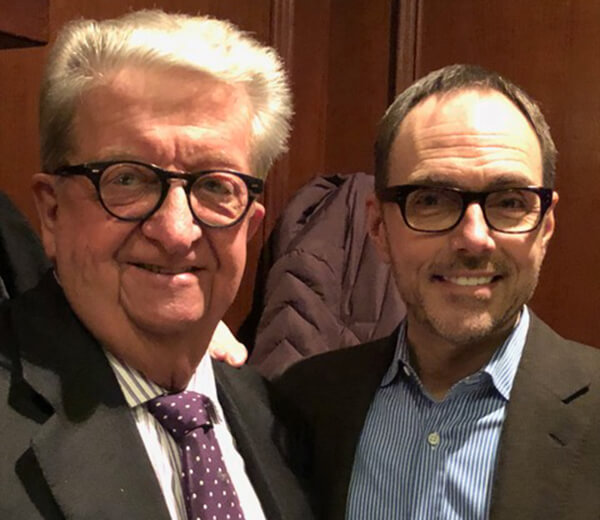 Gerry Banister and Scott Douglass have been together for thirty-two years. They might not have met at all if Gerry hadn’t dropped by Saluté to take a break from family holiday preparations at Christmastime in 1986. The bartender set Gerry’s usual drink (scotch, neat) at the spot next to Scott. The two struck up a conversation and never looked back.

Gerry and Scott were among the 300 or so couples who were married on March 22, 2014 in Pontiac, when the county clerks in four Michigan counties (Ingham, Oakland, Washtenaw, and Muskegon) issued marriage licenses in the hours following the March 21 court decision striking down the state’s same-sex marriage ban.

“It was an emotional day,” said Scott. “Particularly seeing couples with their kids, knowing that we were witnessing the first generation of gay families that could enjoy some measure of legal security and public acceptance.”

Gerry and Scott’s involvement in the local LGBT community at one time also involved serving as volunteers and organizers of the local Human Rights Campaign annual fundraising dinner, which grew to be the largest LGBT event in the nation, routinely drawing 2,000 people. Gerry was also on the board of Affirmations for many years.

When not volunteering, Gerry works in real estate. His background includes executive HR roles at FTD International and Chatham Super Markets. He is a former Catholic priest. He’s the sort of person whom others rely on as a connector, organizer and “get-it-done” guy.  It’s his friendships and connections that make it possible for HOPE to secure unique and beautiful venues for the annual donor recognition event each year.

Scott, whom Gerry describes as “visually gifted, with a photographic memory” works, not surprisingly, at the Michigan Design Center in Troy. Designers, architects and decorators rely on his good eye and encyclopedic memory for styles, product lines and the myriad details of furnishings and fabrics He’s also a car buff and member of the Lambda Car Club.

Although the subsequent Supreme Court decision on same-sex marriage secured their marital status, Scott and Gerry encourage members of the LGBT community to keep fighting discrimination and resist complacency. That’s one of the reasons they are members of The HOPE Fund Legacy Society – a planned giving process where the HOPE Endowment Fund is named as a beneficiary in their wills.

Gerry’s involvement in The HOPE Fund goes back to its origins—he is one of the first people Allan Gilmour and Mariam Noland called upon when the Community Foundation was exploring the idea of establishing a fund to support the LGBT community.

“The HOPE Fund has definitely had an impact and there would be no HOPE Fund without the Community Foundation,” said Gerry. “Mariam Noland has been very committed since day one and Katie Brisson is totally committed to the goals of The HOPE Fund. Allan Gilmour took the long view and provided a great deal of the vision. We have been very fortunate,” he added.

As they look to the future of The HOPE Fund, Gerry and Scott expect to see a continuation of the work of professionalizing and strengthening the nonprofits that support the LGBT community. And they envision opportunities to engage a new generation in fighting job and housing discrimination, disparities in medical care, and barriers to Social Security survival benefits for LGBT partners.

But while they relish the gains of the past thirty years, which parallel their own course as a couple, Gerry and Scott are very much looking ahead to the future.

Donate to The HOPE Fund

Creating a Culture of Support for LGBT Older Adults