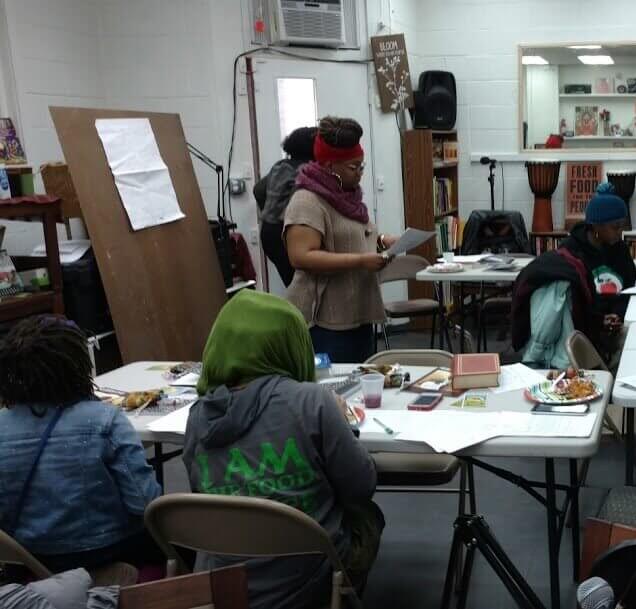 Detroit’s creative community has gained a valuable resource in the Riverwise Storytelling Workshops, which focus on grooming storytellers within the city.

Riverwise Magazine was established in 2017 to highlight the impactful community improvement and development work happening in Detroit neighborhoods that is often missing from regular media coverage. In its first year, Riverwise Magazine, in partnership with the James and Grace Lee Boggs Center to Nurture Community Leadership, launched a storytelling workshop series with the help of a grant from the Detroit Journalism Engagement Fund.

The Detroit Journalism Engagement Fund, a $1 million initiative started in 2017 by the Community Foundation for Southeast Michigan, the John S. and James L. Knight Foundation and the Ford Foundation, aims to increase the quality, outcomes and reach of journalism in the region, with an emphasis on engagement, innovation and the equitable recovery of Detroit.

“It made me feel like a better writer,” said workshop leader Dean Garcia, “I was able to pass down some techniques that aren’t part of an orthodox discipline.”

In Garcia’s most recent workshop, the collective gathered at the Northwest Gallery of Art with aspirations to co-author a piece focused on a Detroiter’s perspective.

Garcia often introduces true stories of Detroiters he’s known in his personal life to get storytellers to think of different perspectives in the city. In his last workshop, he discussed his sister – a young nurse-in-training trying to navigate college, careers and the city in wake of the Great Recession.

In this particular session, Garcia talked about his sister’s struggles and triumphs when navigating life as a college student in a city struggling economically. Discussion followed, and members could expand on the perspective being offered.

What followed was a four-part session with several members contributing thoughts, ideas, and sections of writing for a collaborative coming-of-age fiction titled “Battle Royale.” A snippet of the story was published in the most recent issue of Riverwise Magazine.

For many of the workshop attendees, the program serves as a chance to grow more comfortable in their medium while learning about more ways for local artists to publish their work.

The dozens of storytellers share the experience of having a piece of their work published in Riverwise Magazine – a first for many of the storytellers.

“That’s always just a wonderful feeling to take something from an idea to an actually produced outcome,” Garcia said. “I think the attendees really enjoyed the workshop process, but to have it validated with its publishing was definitely that finishing touch.”

The team at Riverwise Magazine believes that it can activate talented storytellers in the city that otherwise may not be comfortable expressing themselves.

Its workshops train citizens to share these stories in a more formal way. This prepares the participants to share stories on a larger platform. It also means that people with these perspectives, who might not have had access to traditional training, can amplify the narrative of their communities and the issues they care about.

“I think that just as the creative economy grows in Detroit, there will naturally be a need for writers,” Garcia said. “We have a lot of them, and the workshops are a big step in exposing them to opportunities to have their work published.”

Supporting Innovation in the Region