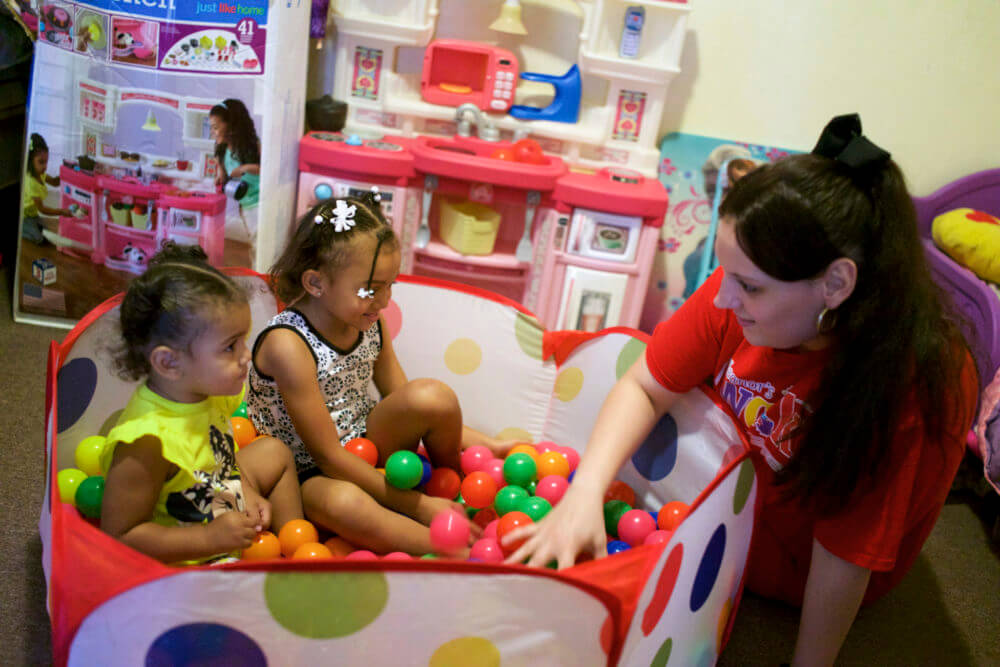 With a larger number of Early Head Start seats available in Detroit for newborns, the Innovation Fund made some key, early investments for agencies to better support and connect to new moms. One grant supported embedding doulas within Head Start agencies. Here is one person whose life was touched by that investment.

Amanda Lewis knew nothing about mothering when she gave birth to her first child. Nobody even asked if she’d like to breastfeed or taught her that it is good. She never witnessed her mother breastfeeding. “When I got home with my baby Kaleah, I went into my bedroom and tried and tried to make it work. Then I gave up. I only tried for 5 minutes.”

The next time, she was ready. Pregnant with Sabrina, she enjoyed the advice and comfort of a doula (DOO-lah), a woman trained to support soon-to-be mothers, and new ones. (Doula is an ancient Greek term meaning “servant-woman.”) A program offering doulas to low-income women was funded in 2014 by the Head Start Innovation Fund.

Amanda’s doula taught her how to ride a big plastic ball while pregnant to comfort her baby, and how to talk to her newborn with enthusiasm and real words, so the baby’s spongey brain would learn language quickly. And, Amanda, at 27, finally learned about breastfeeding, and was able to enjoy nursing Sabrina for a few days after her birth in April 2016. Frustrated by an anatomical challenge, she turned to breast pumping – another skill she learned from her doula. She fed Sabrina her own breast milk until the child was 8 months old – then donated the pump to another new mom.

“I love her,” Amanda says of her doula. “She’s like a mother to me.” Amanda was one of 12 children, and her own mother kicked her out when she was 13; she was raised by family friends, but left high school after six months. The doula not only encouraged her, but led her into what she calls her new family: the men, women and children of Head Start.

Her birth family discouraged her from rushing her babies into school, but Amanda enrolled both of them in Head Start classes. Sabrina started the Infant-to-Toddler program at five months. Mom says Sabrina, now 1, learned at Early Head Start “to crawl, to walk, to feed herself, to pick up things and throw things, and because she’s around people all the time, she developed a little bit faster than Kaleah. But Kaleah, in school since 2016, can at 4 write her name and her age, and tie her shoes. “She’s learned manners, and how to be respectful, and she has calmed her anger down a whole lot.”

Amanda walks her girls nine blocks to school every day, then lingers, helping out, learning from watching the pros how to be what she calls “my children’s first teacher.” Two days a week, she takes courses in the same Focus Hope complex toward earning her GED, and has never felt more excited. “Sometimes I discourage my own self, but they bring me back up. I’m not only giving my kids a good education, but giving myself a better outlook on life, giving me a chance.”

Her goal: To teach.