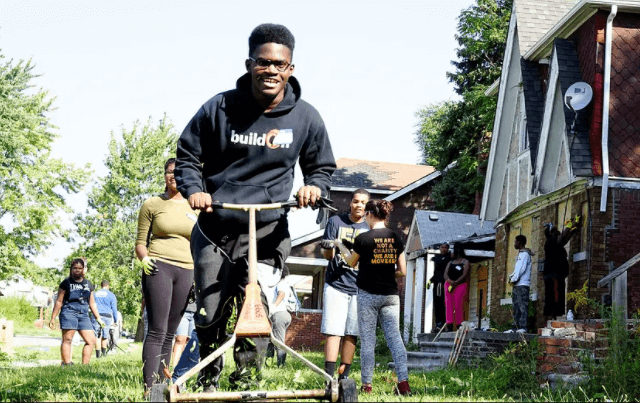 For over 18 years, Build-On has established on the grounds of Detroit a growing opportunity to engage students in social justice education and community service with the strive to break the cycle of poverty, illiteracy, and low expectations.

“We look to mobilize around a multitude of different issues from neighborhood blight to things like food deserts to working with the home-free population and working with the elderly,” said Michael Matthis, Program Director of Build-On’s U.S. team in Detroit. “It’s usually things that students are passionate about. We kind of look at ourselves as the catalyst to help students respond to the change that they want to see in their local communities.”

Build-On, a nonprofit organization of around 30 years, includes both domestic and global programs, most notably the ability for students to help build schools in developing countries such as Haiti, Senegal, and Guatemala in order to improve educational quality and poverty.

But here in the U.S. like Detroit, students have the chance to address issues that they see in their own neighborhoods. In Southwest or Corktown, students emphasize connecting with the senior community, spending time with them to ensure that the seniors are aware that they are “respected and are a vital part of the community.”

Go to another neighborhood in Detroit, and Osbourn High School students tackle their most prominent issue of blight where homes have been left abandoned, forgotten, and prone to crime. By painting murals and cleaning up local parks, students engage in projects to improve the outdoor space for locals and visitors.

All these programmings are centered around students and communities of colors, specifically those of low income who are often overlooked and marginalized within the U.S. and globally.

“We know how incredibly powerful our communities and students are, but we are also very aware of the obstacles and barriers. And so, what we want to do is to help remove those barriers, so people can, really in their own power, start to make changes in their communities and their lives,” said Kapria Morrell, Development Director of Detroit.

And many of the volunteering students are actually those who face the same challenges that they work to alleviate, such as the struggle of finding permanent housing and having consistent dinners every week.

“Those are the same students who are going and joining our projects to work with us at soup kitchens when we pass out meals and when we put together kits to give warm blankets to the home-free,” said Matthis.

When it comes to racial reconciliation, Build-On centers around a concept of “service learning” which provides an opportunity to “put a face” on the locals whom the students volunteer for rather than just simply agreeing that certain projects are taking place.

“You have an opportunity in service learning to understand and learn why is it that this park needs to be cleaned, who are the people, can we actually meet these people face to face that we’re giving these blankets to and understand their stories, and that goes a long way in racial reconciliation,” said Matthis.

Hence, rather than acting as its own subset, the entire activism towards racial awareness is something that acts as a founding base of Build-On’s initiatives.

“If you really think about it, it’s multi-faceted, it’s systemic,” said Matthis. “It’s something that infiltrates pretty much every social justice issue, so being able to combat it on a multitude of fronts is really the outcome of what we do in service learning.”

Build-On alum and board member Keely Crimando agrees. It’s part of the reason why she decided to return to Build-On after being involved in the organization throughout her high school years.

“The work is not done,” she said. “And what I mean by that is not that Build-On is doing anything wrong, but the work of civil rights, racial justice, education, literacy, and poverty: that work is never going to be done.”

And especially with the rising prevalence of social issues regarding police brutality, Build-On has made an emphasis of being able to call out the matters with specificity, whether on social media or through conversations with students, listening to their personal experiences and asking them: “What is it that you would like to do about this. How would you like to mobilize, what kind of projects would you like to do to combat this?”

It’s the mindful awareness of listening to students that maintains close bonds between all workers and students of Build-On, a crucial aspect of any group-led efforts, and it goes without a doubt that it improves Build-On students themselves.

“We’re seeing that connection with getting them engaged in their passions. Their civic engagement and community engagement are translating to improve academic attendance just throughout their academic experiences,” said Morrell.

In a recent evaluation of the organization, 98% of Build-On students have been found to graduate from high school, and students of the programs were in school for 18 more days than their peers who weren’t. Crimando’s friends whom she met while doing regional service projects back in  freshman year of high school are now graduating with master’s degrees and working in social justice work.

Even with the pandemic, which Morrell said was an initial “disruption, not an interruption,” Build-On continues to expand their outreach to encompass students of other low-funded schools, providing them outlets to contribute to their communities.

“Build-On has really continued to keep itself and increase its presence by being a resource in terms of education, of anti-racism, and the things that go on everyday that people need to be aware of and also being a part of the solution,” said Crimando.

This past year, Build-On has implemented LIT: Leaders in Training which narrows its focus on the specific students actually want to lead projects in their neighborhoods, teaching them the necessities of formating projects and making an impact. With COVID, it’s opened up to schools where Build-On staff may not be stationed in, but are still part of the neighboring communities in Detroit — and Community Teams still enable students from any group and school to partake in their international programs.

As Morrell highlights, Build-On is a “movement,” not a charity.

“I think it’s phenomenal, and I’m just so proud of everything that our organization does,” Crimando said. “I’m thrilled to be a part of it.”

Harmony Rhodes: How I Became an Advocate for Youth Leadership and Philanthropy